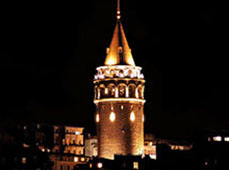 The Galata Tower (Turkish: Galata Kulesi), also called Christea Turris (Tower of Christ) by the Genoese and Megalos Pyrgos (The Great Tower) by the Byzantines, is located in Istanbul, Turkey, to the north of the Golden Horn. One of the city's most striking landmarks, it is a huge cone-capped cylinder that dominates the skyline on the Galata side of the Golden Horn.

The Galata Tower was built as Christea Turris in 1348 during an expansion of the Genoese colony in Constantinople. It was the apex of the fortifications surrounding the Genoese citadel of Galata. The current tower should not be confused with the old Tower of Galata an original Byzantine tower, named Megalos Pyrgos, which controlled the northern end of the massive sea chain that closed the entrance of the Golden Horn. This tower was on a different site and was largely destroyed during the Fourth Crusade in 1204.

The 66.90 m tower (62.59 m without the ornament on top) was the city's tallest structure when built. In 1638, Hezarfen Ahmet Çelebi flew as an early aviator using artificial wings from this tower over the Bosphorus to the slopes of Uskudar on the Anatolian Side.