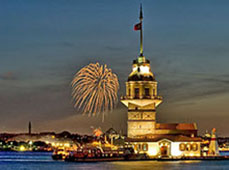 Maiden's Tower (Turkish: Kız Kulesi), also known in the ancient Greek and medieval Byzantine periods as Leander's Tower (Tower of Leandros) sits on a small islet located in the Bosphorus strait off the coast of Uskudar in Istanbul, Turkey.

Maiden's Tower was first built by the ancient Athenian general Alcibiades in 408 BC to control the movements of the Persian ships in the Bosphorus strait. Back then the tower was located between the ancient cities of Byzantion and Chalcedon. The tower was later enlarged and rebuilt as a fortress by the Byzantine emperor Alexius Comnenus in 1110 AD, and was rebuilt and restored several times by the Ottoman Turks, most significantly in 1509 and 1763. The most recent facelift was made in 1998. Steel supports were added around the ancient tower as a precaution after the 17 August 1999 earthquake.

Used as a lighthouse for centuries the interior of the tower has been transformed into a popular café and restaurant with an excellent view of the former Roman, Byzantine and Ottoman capital. Private boats make trips to the tower several times a day.