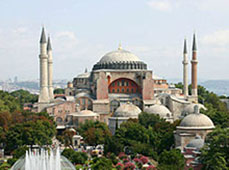 Hagia Sophia was an Eastern Orthodox Cathedral and the seat of the Patriarchate of Constantinople between 537 and 1453. The building was changed into a mosque from 1453 until 1931. It started to serve as a museum on 1 February 1935 by Mustafa Kemal Atatürk who was the founder of the Turkish Republic.

The church included some holy relics and silver iconostasis which have 49 feet length. During the times of the Eastern Orthodox Church, the building witnessed the excommunication of Patriarch Michael I. Cerularius on the part of Pope Leo IX in 1054 an act which is also known as the start of the Great Schism. In the date of 1453, Constantinople was conquered by Sultan Mehmed II who converted the building into a mosque. Until that time, the Church had a necessity to be restored. Despite the Christian Cathedral which made a strong pressure over the Ottoman rulers, they decided to change it into a mosque. All the things which can show a symbolic feature of Christianity were removed. Instead of those, some Islamic features and four minarets were added. It remained as a mosque until 1931. Then, it was close to the public for four years. However, the building was reopened in 1935 as a museum by the Republic of Turkey.

The Hagia Sophia was a source of inspiration for the other Ottoman Mosques such as the Blue Mosque, The Sehzade Mosque, The Suleymaniye Mosque, The Rustem Pasha Mosque and The Kılıc Ali Pasa Mosque.

This building is so magnificent that many artists created works whose content is related to The Hagia Sophia, such as paintings mostly.